The in’s and out’s of your Menstrual Cycle

There is so much of power within your uterus. Your body is designed to conceive, grow and carry a baby until he or she is ready to enter this world. Your menstrual cycle is what makes conception possible. It’s important to understand how this process works as this information can either help you get pregnant or avoid getting pregnant as well as manage menstrual symptoms and understand when there is a problem.

Each month one of your ovaries will release an egg, this process is called ovulation. Before, during and after ovulation occurs, hormonal changes prepare the uterus (womb) for pregnancy by thickening the endometrium (lining of the uterus). If fertilisation does not take place the uterus lining sheds as menstruation.

In this blog I will take you through the in’s and out’s of your menstrual cycle, what happens in your body and what is seen as normal.

The menstrual cycle includes several phases and is made up of two overlapping cycles. One cycle is happening in the ovaries and the other in the uterus. Hormones are chemical signals that are sent through the body and are used to keep the cycle going. The brain, ovaries, and uterus work together and communicate through hormones.

First Half of the Cycle – Follicular Phase

In the Uterus: Menstruation (menses) phase

When does it occur: The day the bleeding starts to the day it ends.
What happens: The endometrium (lining of the uterus) and blood is shed through the cervix and vagina.

The menstrual cycle begins on the first day of menses. Your menses can last anywhere from 3-8 days (on average 5-6 days). The first two days usually have the heaviest flow. In this time you may also experience menstrual cramps or pain.

In the Ovaries: Follicular phase

When does it occur: From the start of your menses up to ovulation.
What happens: The brain send signals to the ovaries telling them to prepare an egg which will be released.

The hypothalamus detects hormones in the body and sends messages to the pituitary gland (a small area in the brain that makes hormones). The pituitary gland produces a hormone called Follicular Stimulating Hormone (FSH). The rise in FSH sends signals to the ovaries to prepare an egg for ovulation.

Ovulation is the release of an egg from the ovaries. Multiple follicles (fluid-filled sacs containing eggs) start to rise in both ovaries each in different stages of development.

As the end of menses approach (about halfway through the follicular phase) the largest follicle in one of the ovaries becomes dominant. This dominant follicle is the one that will prepare to ovulate. As it grows this follicle produces estrogen which peaks a day or two before ovulation occurs. The follicular phase may last 10-22 days and can vary from cycle to cycle.

In the Uterus: Proliferative phase

When does it occur: At the end of menses (bleeding) until ovulation
What happens: The uterus builds a thick inner lining (endometrium)

While the follicles develop in the ovaries, the estrogen produced by the follicles signals the uterus to start rebuilding the lining which has just been shed during the last menses. It’s called the proliferative phase because the endometrium becomes thicker and enriched in blood and nutrients. The endometrium prepares a place for a potential fertilised egg to implant itself and grow. The endometrium is the thinnest during menses and thickens throughout the rest of the cycle.

When does it occur: About halfway into the cycle. It can change every cycle.
What happens: The follicle bursts open and releases an egg from the ovary into the fallopian tube.
Ovulation is the interlude between the two phases (follicular phase and luteal phase) of the ovarian cycle.

As the dominant follicle grows it produces more and more estrogen. It will be at its largest (2-3 cm) just before ovulation. When estrogen levels are high enough, they signal the hypothalamus to stimulate the production of gonadotropin-releasing hormone (GnRH) which in return stimulates the pituitary gland to secrete luteinising hormone (LH). This spike in LH and FSH causes the follicle to burst to result in ovulation.

Ovulation usually occurs on day 13-15 of the cycle. The surge in LH also causes a brief surge in testosterone, which increases sex drive, right at the most fertile time of the cycle. 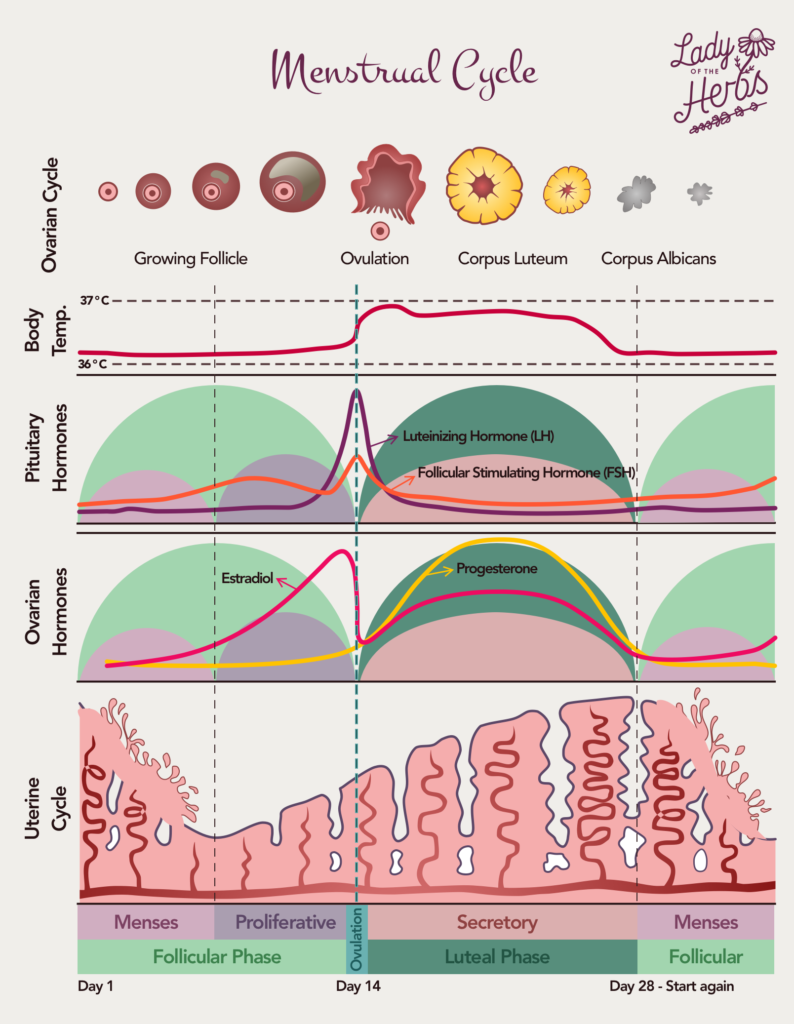 Second half of the Cycle – Luteal Phase

In the Ovaries: Luteal Phase

When does it occur: After ovulation until the start of the next menses.
What happens: The follicular sac which released the egg produces estrogen and progesterone.

After ovulation, the burst follicle transforms into a corpus luteum and begins to produce these hormones. Progesterone levels peak about halfway through this phase.

The progesterone from the corpus luteum supports early pregnancy if an egg is fertilised. The fertilised egg will move down into the uterus.

These hormone changes during the luteal phase are associated with the common PMS (premenstrual syndrome) symptoms many women experience. These symptoms include mood changes, headaches, acne, bloating and breast tenderness.

The corpus luteum starts to break down 9-11 days after ovulation if no fertilisation occurred. This causes a drop in progesterone and estrogen levels resulting in menstruation.

The average length of the luteal phase can last anything from 9 to 16 days with 14 days being the norm.

In the uterus: Secretory Phase

When does it occur: From ovulation until the start of menstruation
What happens: The endometrium (lining of the uterus) prepares to either support a pregnancy if an egg was fertilised or break down for menstruation.

The rising levels of progesterone cause the endometrium to stop thickening and to start preparing for a potential attachment of a fertilised egg. The endometrium secretes (produces and releases) many types of chemical messengers, hence it being the secretory phase. The endometrial cells secrete prostaglandins which cause changes to other cells nearby.

“PGF2a” and “PGE2” are two of the prostaglandins which cause the uterine muscle to contract (cramp). After ovulation, these prostaglandins start to rise and reaches their peak during menstruation. This cramping helps to trigger the menses. Prostaglandin production is prevented by the production of progesterone from the corpus luteum if a pregnancy has occurred to avoid contractions from impacting early pregnancy.

The corpus luteum stops producing estrogen and progesterone if pregnancy didn’t occur. The drop in these hormones along with the secretion of prostaglandins cause the blood vessels to tighten (constrict) and the endometrium to break down and shed.

So, What is Normal bleeding? 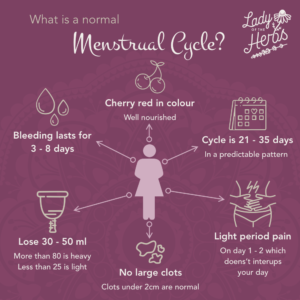 Every woman differs and it’s hard to determine what is normal, some women have short and light menses whereas others have long and heavy menses. A woman’s menstrual cycle may also change over time.

Keeping track of your menstrual cycle
It’s important to keep track so you can understand your cycle and pick up if anything changes. Keep a record of when your menses starts and ends, what your flow was like on each day and if you had any additional symptoms (pain, bloating, breast pain, etc.) as well as if you experienced any changes in your mood or behaviour. There are numerous apps available to help you track your menses.

Over several cycles, you will begin to see a pattern and be able to identify irregularities such as amenorrhea, pregnancy, period pain, heavier flow, etc.

Many women struggle with some kind of problem relating to their menstrual cycle. These common problems include:

Amenorrhea: The absence of menses. It is considered abnormal except during pre-puberty, pregnancy, lactation, and post-menopause. Possible causes can be hormone imbalances, an-ovulation, weight gain or loss and excessive exercise. (read more here)
Premenstrual Syndrome (PMS): Hormonal changes before the onset of menses can trigger a range of effects including irritability, sore breasts, fluid retention, fatigue, headaches, etc. (read more here)
Dysmenorrhea: Dysfunctional or painful periods. Certain hormonal levels are higher than what they should be and the uterus is prompted to contract/ tighten harder than necessary to shed the endometrium. (read more here)
Heavy Menstrual bleeding: Also known as menorrhagia. There are multiple causes for heavy bleeding including weak uterine muscles, strong blood flow or other menstrual related problems such as endometriosis. It may cause anemia if left untreated. (read more here)

What influences your menstrual cycle

There are many factors that may influence your menstrual cycle including hormonal imbalances, amenorrhea, an-ovulation, diet, your weight, stress, exercise, pregnancy, abuse, etc.

Our society and the way we look at our menses may also have an influence on your menstrual cycle. From a young age, girls are told that menstruation is dirty, ugly, and nasty. They become ashamed of it.

Menstruation is not dirty nor is it ugly. It is a beautiful thing which every woman goes through. It is the most natural and vital part of the survival of our species.

You must not be ashamed of the menses, instead learn to embrace it, appreciate it and understand it! 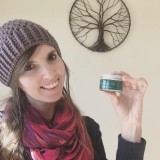